The capital of North Sulawesi, Manado boasts a large harbour, Sam Ratulangi, the city’s modern international airport and a population of around 500.000 people.

Manado rose to become an important city in the Minahasa region of North Sulawesi during the early colonial period. The city is mainly Christian, an heritage of several centuries of Portuguese and Dutch rule, and with its over 250 churches, the church still plays a prominent role in the community here. Sundays are always an especially busy day with the streets filled with church-goers.

Close to the harbour on the north side, you will find the big Pasar Bersehati food market which includes a big fish market where you can buy the daily catch of fresh fish or look out for the section given over to the sale of RW – fresh dog meat! 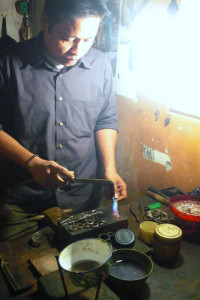 Some of the main sights are the local museum, the Buddhist temple Ban Han Kiong and the beautiful orchid gardens in Angrek, five kilometres outside Manado.

Certainly also worth a visit is Manado Tua, the small volcanic island you can see lying just off the coast of Manado. Once settled by Chinese traders and fishermen who crossed over from the Phillipines, Manado Tua, together with the islands of Bunaken, Mantehagen, Siladen en Nain, Tua, now forms part of the Bunaken-Manado Tua Marine National Park. Known to divers and biologists alike as being one of the most spectacular underwater sites in the world, this protected reserve has a high diversity of corals, fish and other sea animals.

Driving into Manado from Amurang, takes you along what the locals call “The Boulevard”; the largest shopping centre in Eastern Indonesia. Here you will find a multitude of shops, shopping malls and entertainment centres. Most shops stay open until 22.00.